Antioxidants are phytochemicals, vitamins and other nutrients that protect human body cells from the damage caused by free radicals. Antioxidant  phytochemicals  are hydrogen-rich and electron-rich compounds with anti-carcinogenic or anticancer properties. Phytochemicals are bioactive substances of plants that have been associated in the protection of human health against chronic degenerative diseases. Numerous epidemiological studies suggest that diets rich in phytochemicals (plant chemicals) and antioxidants execute a protective role in health and disease(disease fighting plant nutrients).

Any substance that reduces oxidative damage (damage due to oxygen) such as that is caused by free radicals. The free radical formation is controlled naturally by antioxidants.
Free radicals are highly reactive chemicals that attack molecules by capturing electrons and thus modifying chemical structures.  Cell damage caused by free radicals appears to be a major contributor to aging and to degenerative diseases of aging such as cancer, cardiovascular disease, cataracts, immune and brain dysfunction. Overall, free radicals have been implicated in the pathogenesis of at least 50 diseases.
Reactive oxygen species (ROS) is a term which encompasses all highly reactive oxygen containing molecules including free radicals. 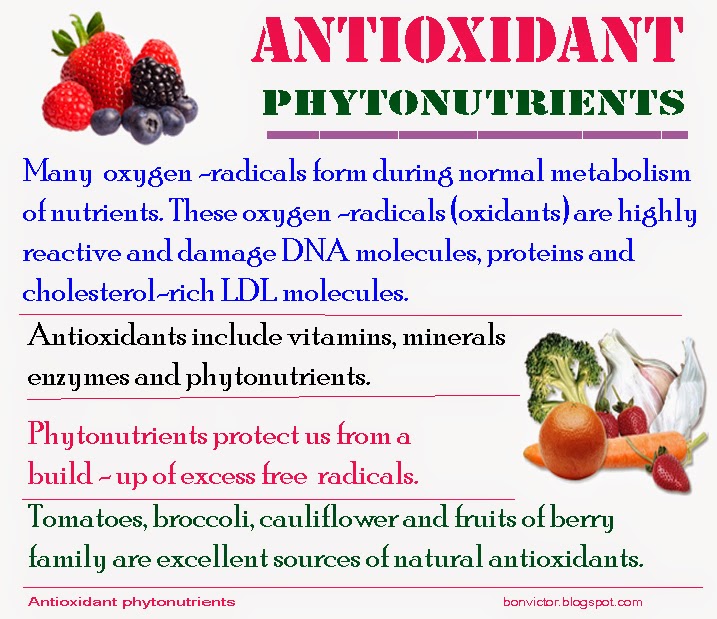 Free radicals are aggressive oxygen molecules that oxidize and damage body cells. Many human diseases are caused or negatively affected by free radicals. Free radicals generally form as a part of natural metabolism, but also by environmental factors such as smoking, exposure to pesticides, pollution and radiation. Free radicals are atoms or groups of atoms that have at least one unpaired electron which makes them highly unstable and reactive. They attack essential molecules of human body including DNA, fats and proteins. Free radicals initiate a chain of chemical reactions resulting in the destruction of healthy cells. Antioxidants are chemicals that offer their own electrons to the free radicals and make them inactive thereby preventing cellular damage.  Free radicals oxidize cholesterol and cause atherosclerosis (hardening of blood vessels) which leads to heart attack or stroke. Free radicals also promote beneficial oxidation that produces energy and kills bacterial invaders. Only in excess, free radicals produce harmful oxidation that damage cells.

Oxytoxic index is a comparative measure of how much oxidation takes place in your body when eat a category of food. The more the oxidation, the greater is the risk of free radicals. There are foods with high or low oxytoxic indices. A daily total oxytoxic score of 100 for women and 120 for women is found in Japan, China and Asian countries, where the incidence of Alzheimer’s and some cancers is very low compared with the USA and Europe. However the incidence of Alzheimer’s in parts of the USA  is 7 times higher and in Europe 3 to 4 times higher than Japan, China and Vietnam.

Oxygen Radical Absorbance Capacity (ORAC) is method of measuring antioxidant capabilities in food and measuring how many free radicals a specific food can absorb. A food is considered to be rich in antioxidants, when its ORAC value is 1000 or more for one hundred grams. The higher the ORAC value, the higher the antioxidant potential of a food. The researchers from the U.S Department of Agriculture suggest that to provide meaningful antioxidant health benefits, one must eat a minimum of 3,500 to 4,500 in ORAC value in daily diet. Recent studies indicate that the average human consumes less than 1000 ORAC each day. A deficiency may lead to degenerative illnesses such as cancer, arthritis or memory loss. 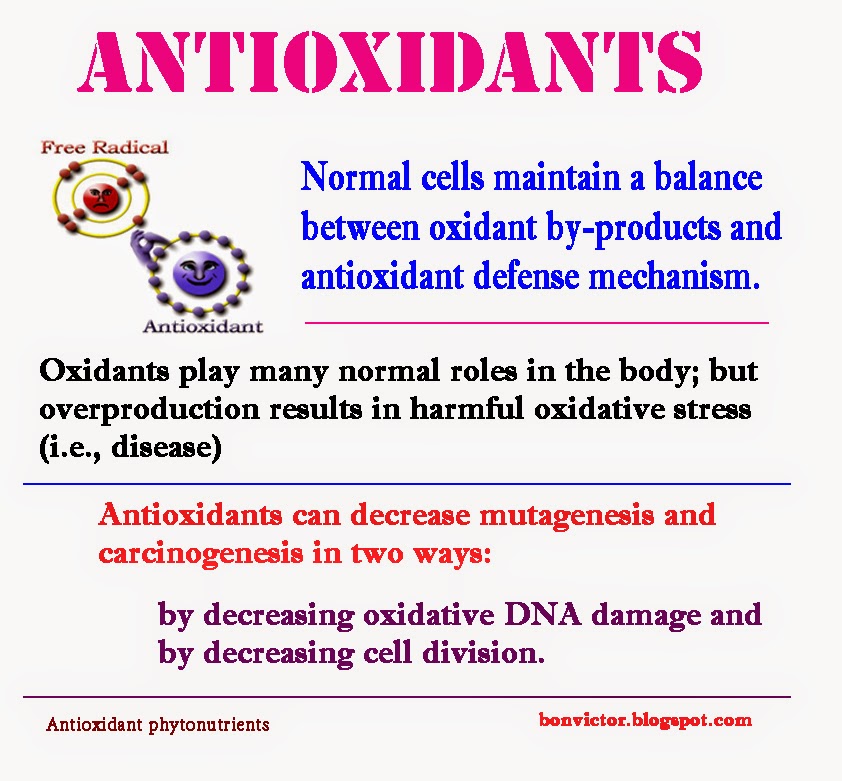 Antioxidants are radical scavengers, which protect the human body against free radicals. Well known examples of antioxidants are the vitamin A, vitamin C, vitamin E and beta carotene, selenium, flavonoids and polyphenols. Lycophene and lutein are also rather unknown antioxidants. Antioxidants have the property to neutralize the free radicals.  Low antioxidant levels in human body lead to oxidative stress and make us more susceptible to heart diseases and cancer. The major groups of phytochemicals that may contribute to the total antioxidant capacity (TAC) of plant foods include polyphenols, carotenoids and vitamins C and E. Antioxidants may also contribute to disease resistance. The intake of plant foods rich in antioxidants may reduce the risk of cancer and improve cardiovascular health. A study of the Chinese Cancer Prevention Society (1993) showed that a combination of the antioxidants beta carotene, vitamin E and selenium significantly reduced the incidence of cancer. The American Heart Association’s Nutrition Committee (1999) advised the general public to consume a balanced diet with emphasis on antioxidant rich fruits and vegetables and whole grains. There is a widespread scientific agreement that eating adequate amounts fruits and vegetables can help lower the incidence of cardiovascular disease and certain cancers.

Many common foods are good sources of antioxidants. The United states Department of Agriculture (USDA) scientists analysed antioxidant levels in more than 100 different foods including fruits and vegetables. Each food was measured for antioxidant concentration as well as antioxidant capacity per serving size. Cranberries, blueberries and blackberries ranked highest among the fruits studied. Beans, artichokes and Russet potatoes were tops among the vegetables. Pecans, walnuts and hazelnuts ranked highest in the nut category. 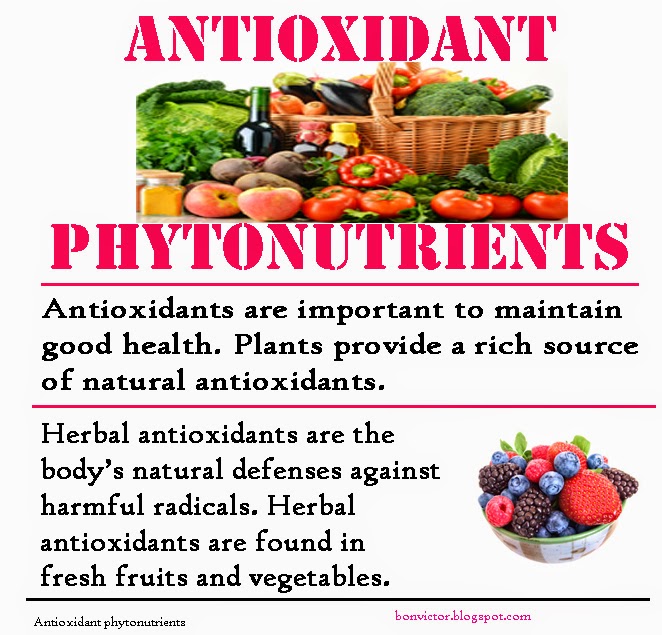 Best way to get antioxidants from foods

It is best to eat a  variety of antioxidant foods in small quantities.
Eat a balanced diet for a balanced body.
Another  way to get more antioxidants is to eat lots of fresh salads of vegetables.
Get  more antioxidants from grains like oats, whole wheat and barley.
Eat more beans such as red beans, kidney beans, black beans and pinto beans.
Consume nuts in small servings.
Drink green tea, red wine and hot chocolate.

Make sure that foods in your daily diet contain a minimum ORAC value of 3,500 to 4,500.
Posted by bonvictor.blogspot.com at 6:12 AM